Report follows:
A long time ago in a galaxy far, far away… Knightfall Garrison received orders from the Emperor to deploy a contingent of ground forces to a celebration event—May the 4th, otherwise known as Star Wars Day—held on Earth, in a planetary system located in the Milky Way galaxy.

Due to ongoing international measures to contain a global viral contaminant, the honour of being one of few planets and locations allowed to hold a mass celebration for May the 4th fell on Melbourne, Australia. The local Garrison and associated legions did not disappoint.

Upon landing, Knightfall forces secured an armament facility located adjacent to the deployment area and began preparations for duty. This facility was declared a neutral zone and shared with members of the Rebel Legion and Mandalorian Mercs. The facility was furnished with snacks and bottled water, as well as chairs for those who could sit.

The day-long deployment involved a variety of promotional duties for the Empire, including: reinforcement at a static effigy of Master Ren; guard duty of an Imperial TIE Fighter; securing a captured BB-8 droid; supervision of a youngling’s toy (LEGO) pen; and roving squads and ad hoc activities.

Across the course of the deployment, members of the public were given a chance to see the ‘real face’ of the Empire. Thousands of younglings and their families mixed with troopers and officer staff to capture holographs and holograms of their interactions. Displays of laughter and enjoyment were also frequently captured by Garrison holograph droids.

Ranking members of the Garrison also engaged with local propaganda outlets—spanning print, broadcast and digital news—ensuring the message of the Emperor reached the ears of those across the planet.

Despite the lure of ongoing Jedi training sessions on the main stage–a feeble effort to attract younglings to the Rebel cause–it is believed the Garrison’s conduct and professionalism was a true highlight of the day. All troopers and support staff should be highly commended, especially those who travelled from distant sectors.

For the glory of the Empire! 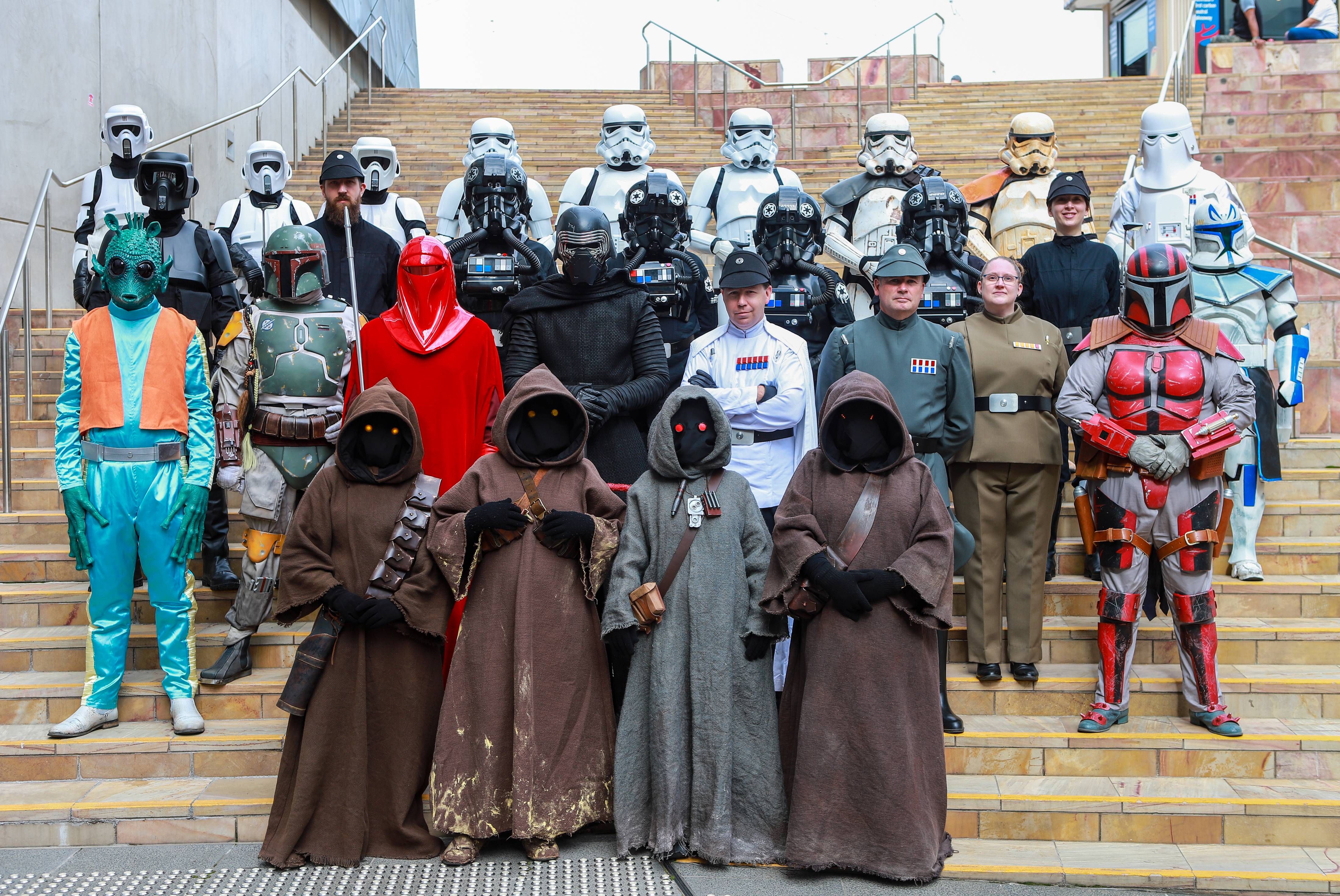 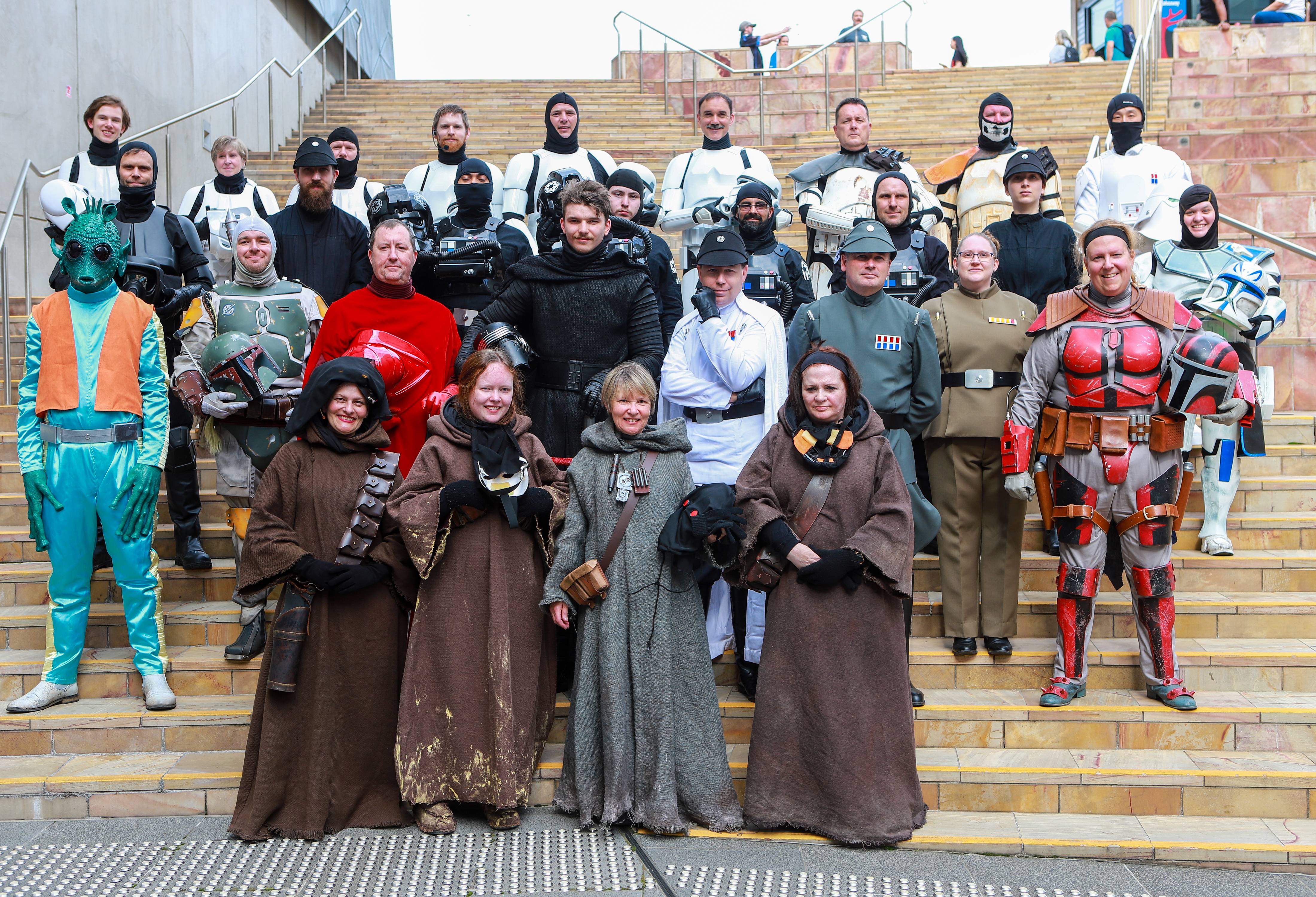 What a way to be back trooping on May the 4th with a Hospital troop.
Monash Childrens Hospital, their foundation and Disney, were able to allow us access to the Childrens Wards to add some much needed smiles, laughter and distraction. Kylo, Tk and two TI’s were split into two groups, we let the Mando’s seperate as Mandolorians are often rogue and go their own way

as we roamed the hospital corridors in search of rebel sympathisers and Empire/First Order supporters, we found plenty of support from the young citizens and their families, happy to have photo’s, a chat and details of any rebel spies seen in the vicinity. Of course the Doctors and Nurses were equally keen to get in on the action and the afternoon proved a much need morale boost to all involved.The hospital is looking amazing with the Moose Imagination tree, Imagineered by Disney recently opened providing a safe place for time out, learning and sensory exploration.
The foundation and hospital were very appreciative of our time and we re-iterated our commitment to supporting them and looked forward to many more visits in the future of which they are glad to accommodate us.

Weather : Overcast but being indoor was no concern.
Covid changes : No gloves, masks to worn when not in Helmeted costume. Initially it was advised to wear masks under the helmets, but confirmed upon arrival this was not the case for Monash. We had photo’s after the event with gloves on.
Injuries: None
Armour repairs : TI 81293 minor screw loose in the armour repaired onsite.
Mission Status : Complete and Successful
Report by : TK 26100

Being Local was easy to get down there and check out the place nice and early, locating change rooms, car parking and the check in tent.
Caught up with all the troopers, though our Jawa would join us around Lunch time she seemed to have a double life that day.
Headed out nice and early with our Panda bear as wrangler, we didn’t get far before being swamped for photos, found plenty of cars and eager owners wanting us to pose for their cars.
Midday we changed around, our Jawa joined us, Panda left us to wrangle the spidey group, I then became the new wrangler, a few hours later we changed again, Rudi became our new wrangler and I joined the kitted up trio once again. 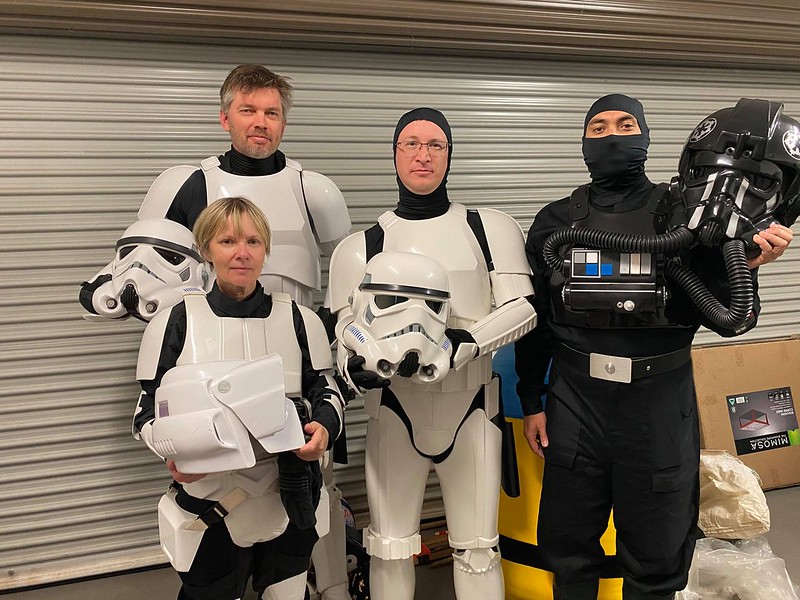 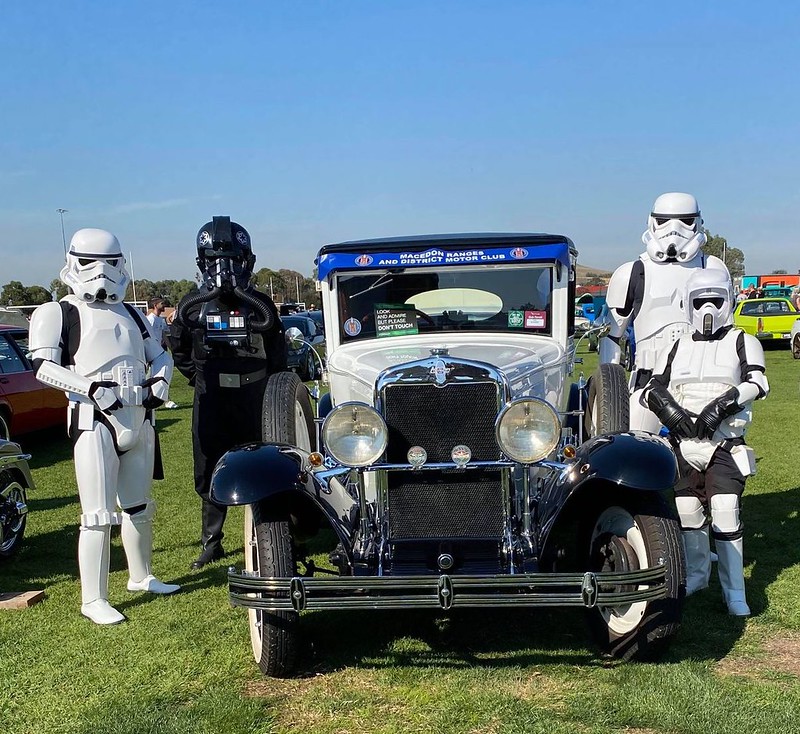 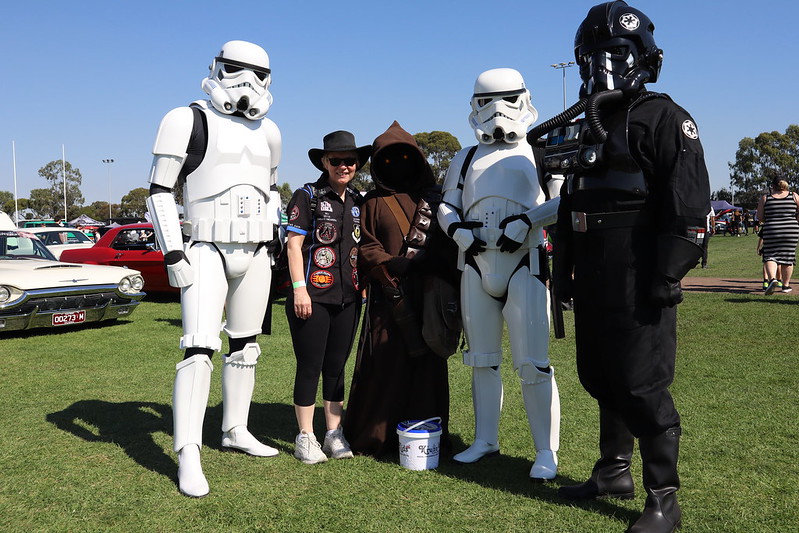 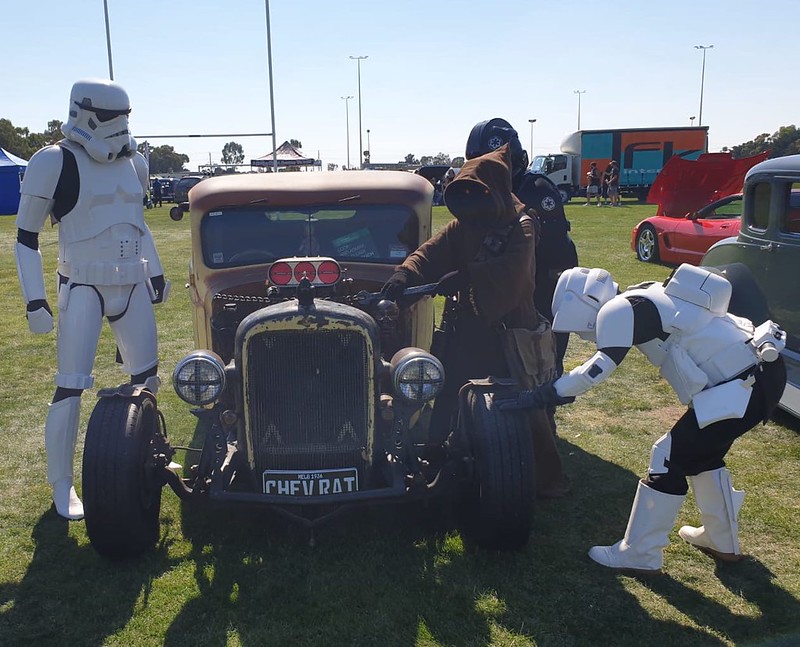 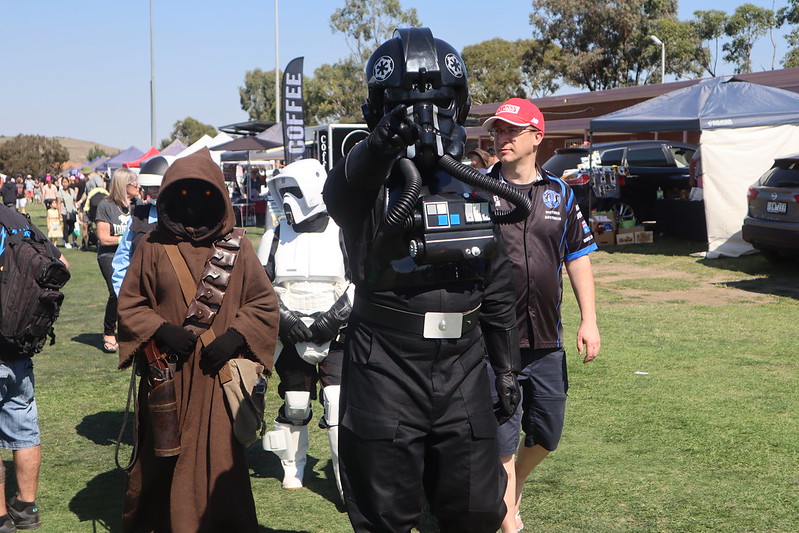 “Imperial intelligence relayed plans for a demonstration of historical records of galactic history circa 0-4 ABY, necessitating the deployment of a specialised recon team to investigate.”

With COVID restrictions easing in Victoria in early 2021, the Astor Theatre planned to screen a marathon session of the original Star Wars trilogy for local audiences. Knightfall Garrison was asked to help provide entertainment and photo opportunities for the crowd as they entered the theatre.

After arriving and gearing up, we decided to cover the ground floor and split into three groups of two, with two pilots outside the front entrance, an officer and scout trooper keeping the ticket desk company, and another pilot and clone trooper holding the fort near the upper theatre access stairway.

The event was relaxed and good fun, with a number of photos taken by the attendees and passersby entertained outside the entrance. After an hour of trooping the lobby emptied and we finished up as the movie marathon began (we also saw a number of people wisely bringing pillows!).

A great event for all involved, and the Astor staff were grateful for our support!

INJURIES: None to report.

It was a typical muggy Melbourne day when the imperial forces scouted out the Imax facility in preparation for the weekends trilogy screenings.

An Imperial drop ship was dispatched with pilot and stormtrooper in order to establish contact and suitability for larger imperial forces to arrive.

Mingling with the crowds, they decided the threat level was low enough not to require backup on the day, and so maintained a professional decorum on patrol until the crowds dispersed into their viewing pleasures.

Once a peaceful order was restored, the pilot and stormtrooper decided to try their hands at the local simulators, hoping to fund the new Death Star project.

Special mentions for Aneesh wrangling his first event, he knew exactly where to put us and help patrons to achieve really good photos with us. 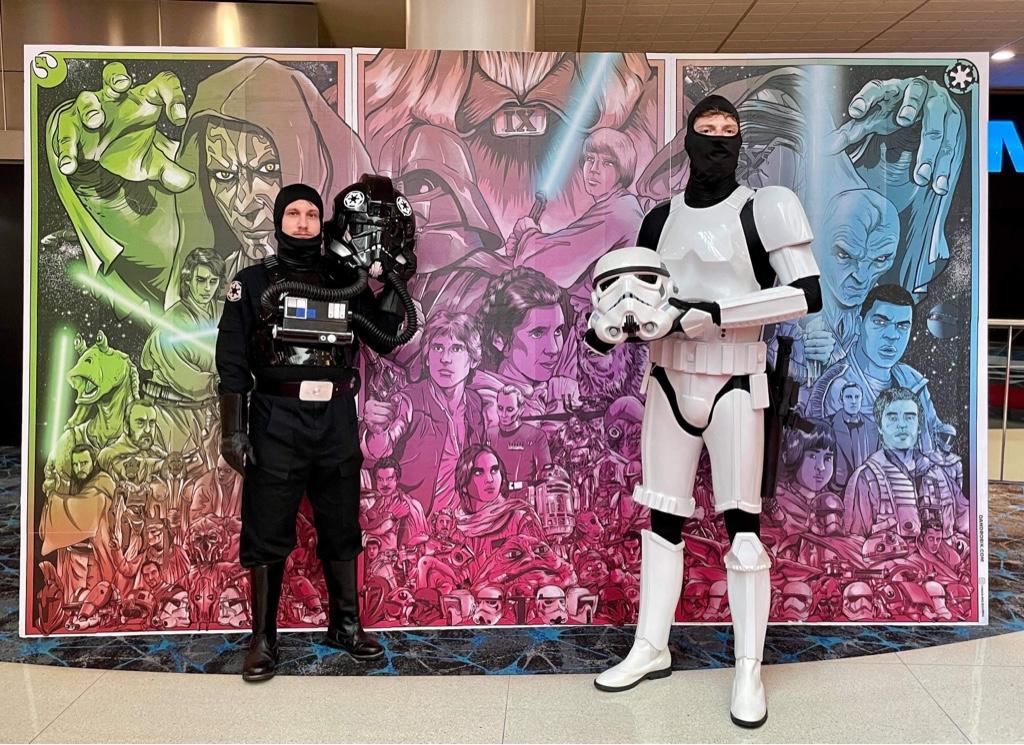 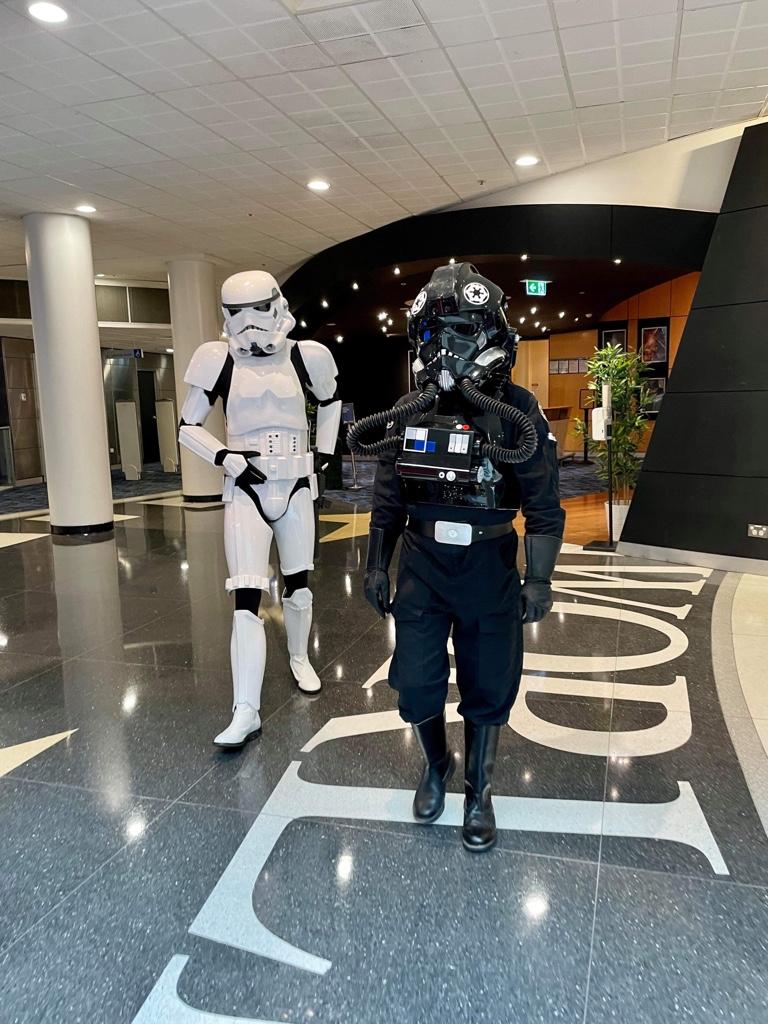 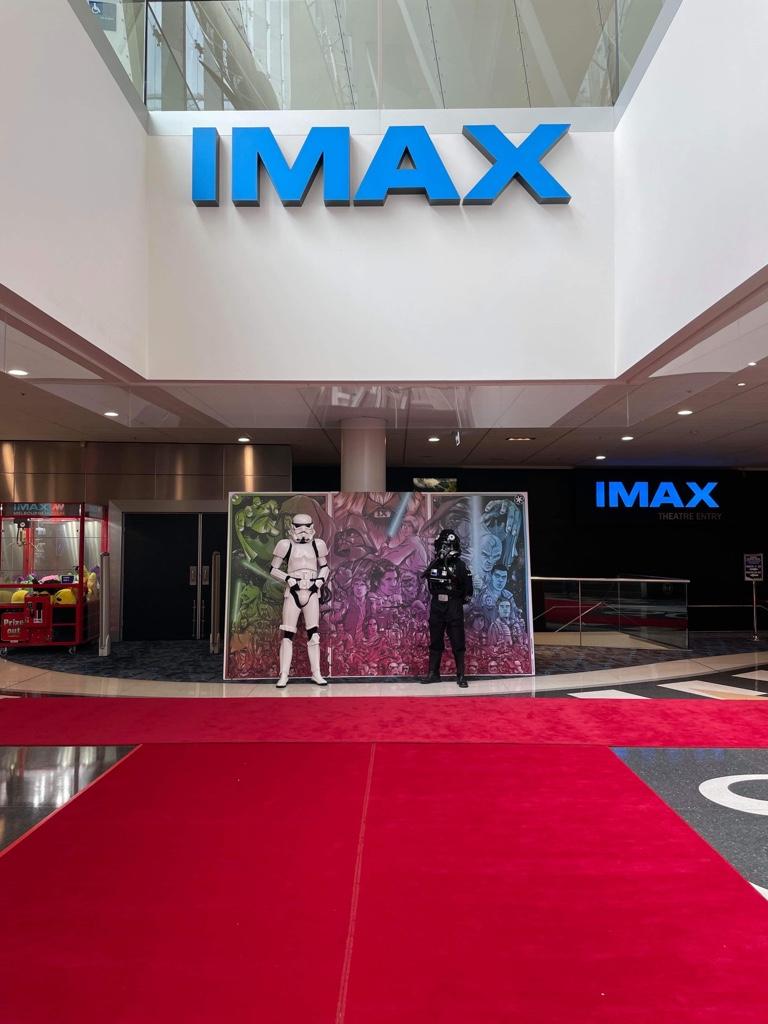 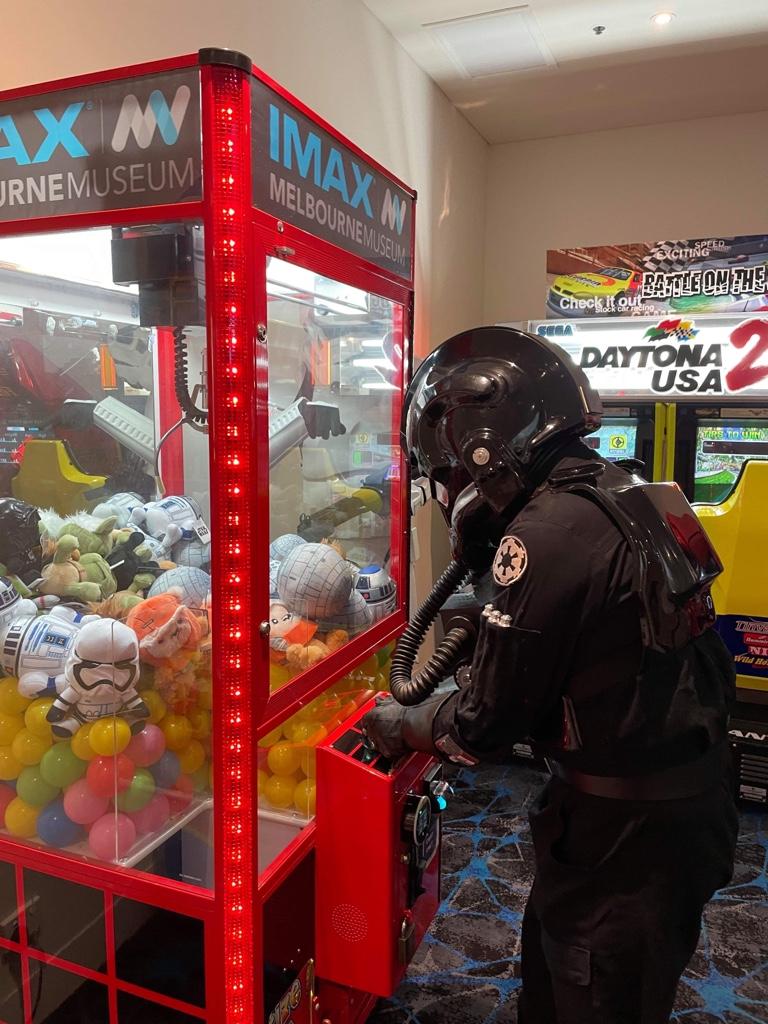 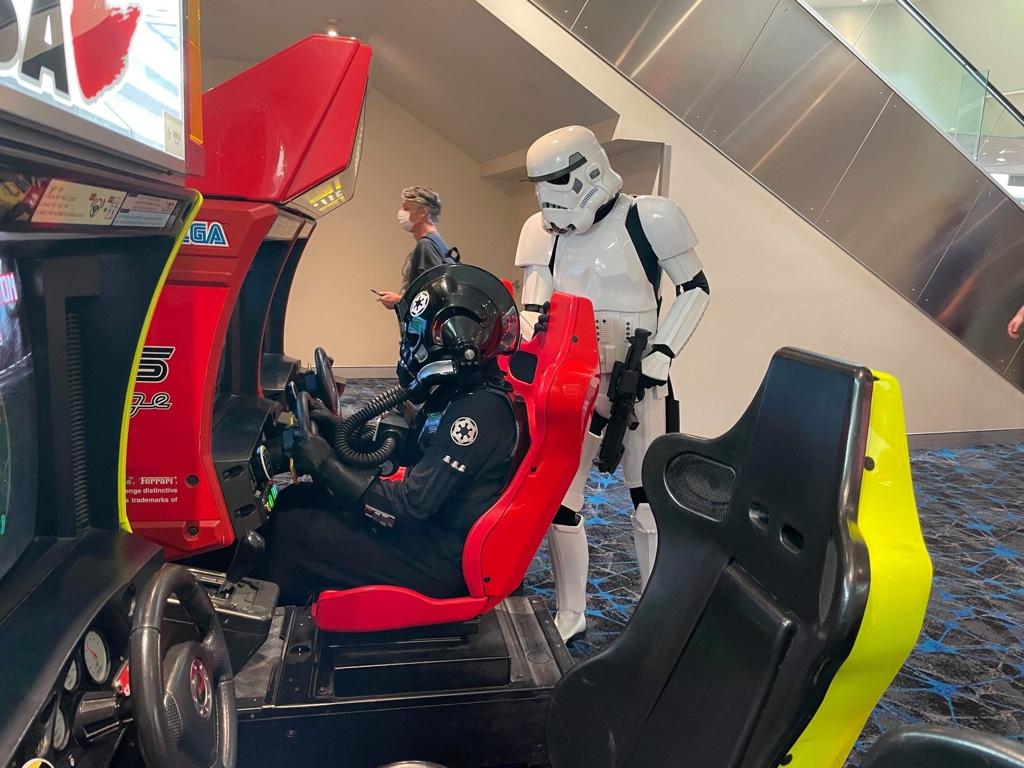 Troop Report:
After a rather quiet 2020, Knightfall was keen to get out for their first troop for 2021. Despite being few in number, the troopers were enthusiastic to show their presence at Village Knox. Cinema staff were very accommodating and we soon found ourselves on the mezzanine level ready to take photos with the movie patrons before they took their seats.  Lots of smiles on kid’s and adult’s faces alike. A successful troop and a good start to 2021.

Continue Reading
Troop Report
The Empire Strikes Back Screening, The Astor Theatre
12.30 Hrs- 19.00 Hrs, 27th January 2020
Mission: To provide security and crowd entertainment at the Astor Theatre’s screenings of The Empire Strikes Back in 35mm.
1PM Screening:
Troopers:
– TI- 50972 (Charlotte)
– TD-18969 (Steve)
– TI-13114 (Aneesh)
– TK-27777 (Rudi)
Wranglers- Andy Vong, Shay
4PM Screening:
-TK – 27777 (Rudi)
-TB-9735 (Merrilea)
– BH- 5284 (Kim)
-TI- 14780 (Glenn)
Wranglers- ID- 6673 (Sean), Steve, Charlotte, Shay, Patricia
7PM Screening:
-TI- 81293 (Brad)
-TI- 74377 (Piers)
-TB- 72822 (Tony)
-TB- 12590 (Andrew)
Wranglers- ID- 6673 (Sean), Steve, Charlotte, Paul
Brief: This was the first tour of duty for 501st KFG troopers since the appearance of a new contagious pathogen identified on this world. New garrison guidelines were being trialled, for the first time, in response to the new conditions and all eyes were on us. Failure in this mission, no matter how minor, would almost certainly reach the ears of Lord Vader. Our mission brief indicated that, in addition to locally-mandated physical-distancing measures, the local inhabitants had taken to wearing individualised fashion accessories over their faces to prevent transmission of the pathogen. Imperial medical knowledge and resources far exceed those of the local authorities, however troopers and unhelmeted support personnel wore similar primitive face coverings in order to keep the locals at ease.
Troopers arrived approximately 45 minutes prior to their respective rostered watch/duty shift. Kitting up was performed efficiently and proficiently, given the limited space and resources available.
Locals had to be reminded on occasion that physical contact between troopers and civilians was prohibited. A minimum distance of 1.5m apart was often difficult to maintain, however many satisfactory selfies were taken with creative camera angling and strategic positioning of our best and brightest troopers
Upon conclusion of their respective shift, the troopers quickly de-kitted and blended in with the local populace before shuttling out to their various next assignments.

Weather Nice and sunny out side the back yard

Report:
Our yearly event to the Special Children’s Christmas Party, came through as a request for video’s, I was representing Knightfall and took the challenge, it did take a moment to remember the correct procedure on placing on the armor again it had been a little while, so once kitted up I proceed outside it was a short walk and had my trusty handler with me taking the video.
A number of the videos are placed up on Special Children’s face book page, others (including Knightfalls) were sent personally to the kids. 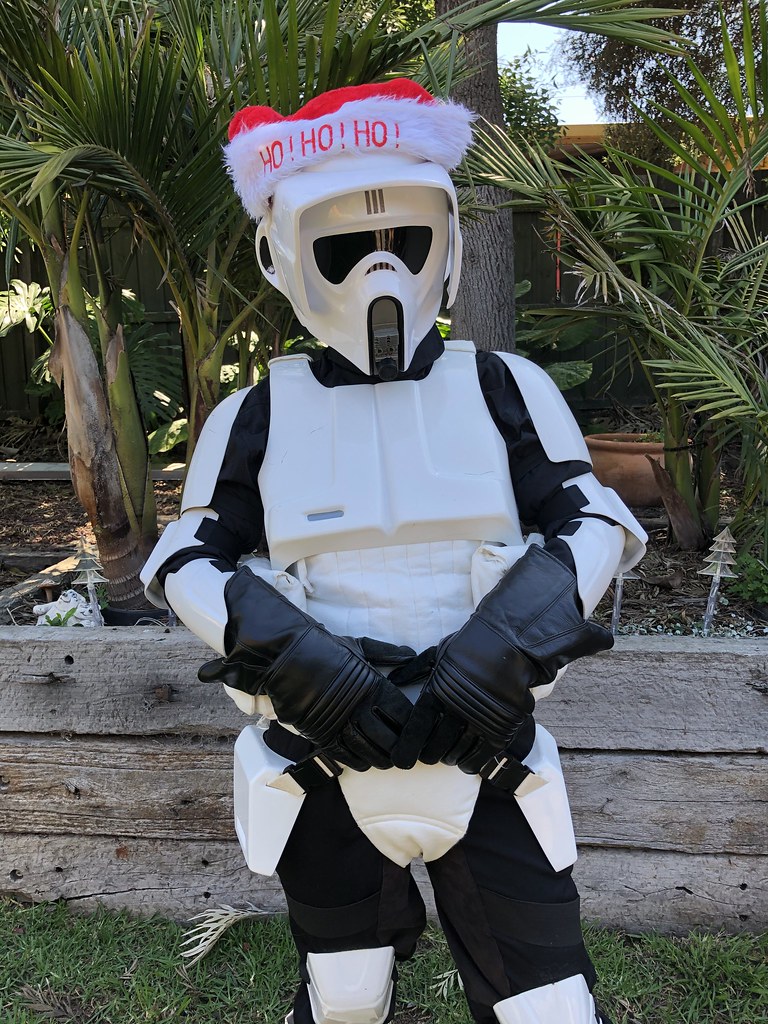